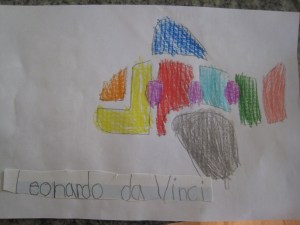 The other day, Sophie brought home stencils and coloring pages about inventors including George Stephenson and Leonardo da Vinci. It prompted an interesting discussion with Charlotte as the two of them argued as passionately as I’ve ever seen them.

In fact, Leonardo da Vinci made the first real studies of flight in the 1480’s. He made hundreds of drawings that illustrated his theories on flight. One of his ideas, the Ornithopter flying machine, was a design that da Vinci created to show how people could fly, and was the basis for the modern day helicopter.

Who is the inventor, the designer or the builder?

3 thoughts on “Who is the inventor?”